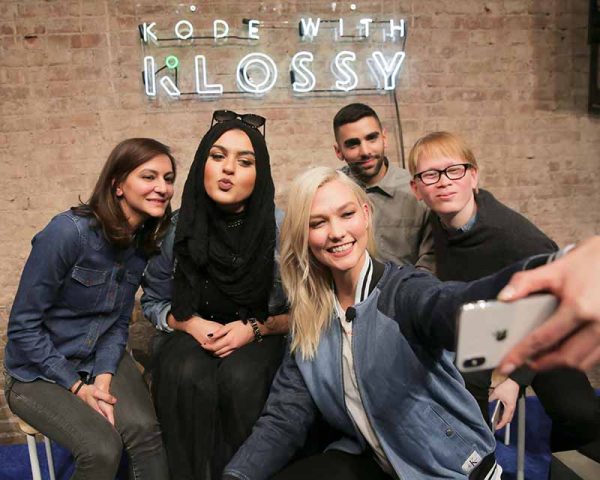 CALVIN KLEIN and Amazon Fashion hosted an intimate discussion with supermodel and entrepreneur Karlie Kloss in support of her organization, Kode With Klossy,  on December 7th on New York City.

The conversation was held at the CALVIN KLEIN X Amazon Fashion holiday pop-up in Soho and centered on the innovation and needs at the intersection of “Fashion, Technology, and Creativity.” Kloss was joined by Phillip Picardi, Chief Content Officer at them. and Digital Editorial Director of Teen Vogue and Allure; Meredith Talusan, Senior Editor at them.; Amani Alkhat, Founder and Editor of MuslimGirl; and Farnaz Azmoodeh, Director of Engineering at Snapchat, Inc. The audience was comprised of past and current Kode With Klossy scholars, as well as industry leaders and press.

As part of the event, CALVIN KLEIN was proud to make a donation in each guest’s honor to Kode With Klossy. Kode with Klossy empowers girls to learn to code and become leaders in tech. Started in 2014, when founder Karlie Kloss began her own adventure in learning to code, Kode With Klossy hosts coding summer camps and engages a national community changing the role of girls and women in tech. for more information, please visit www.kodewithklossy.com.

The CALVIN KLEIN X Amazon Fashion holiday retail experience is available for customers to shop now through December 31st. The experience includes pop-up shops in New York City and Los Angeles, as well as an online brand store on Amazon.com/mycalvins, and is a first between Amazon Fashion and CALVIN KLEIN. Each pop-up location sells CALVIN KLEIN UNDERWEAR products, including men’s and women’s underwear and loungewear offerings, while the online CALVIN KLEIN brand store will offer an expanded selection of both CALVIN KLEIN UNDERWEAR and CALVIN KLEIN JEANS product. Kloss is featured prominently in store and in the online brand shop creative, along with comedian and author Lilly Singh.