In a New York season where referencing European aesthetics is one of the major trends, Emily Saunder designing for her eponymous label SAUNDER alluded to it twice by touching two eras in UK history, wartime Britain and the 1980s.

Inspired by the 1980s BBC Miniseries ‘The Singing Detective,’ the story of a pulp novelist hospitalized for a chronic skin condition, the Saunder Fall 2014 explores the overlap of 1940s fashion, which is time setting of the narrative and 1980s aesthetics, which happens to the time when the show was produced.

In “The Singing Detective,” the protagonist Philip E. Marlow drifts into feverish dream sequences where he believes he is a Noir detective. Soon enough, these dreamscapes overlap with reality, mixing our novelist’s hallucinogenic fantasy with memories of growing up in wartime Britain.

Emily Saunder’s interpretation of this aspect of the story is what made this collection very interesting. She combines the film fatale silhouettes with both a palette and geometric pattern referencing the 1980s. 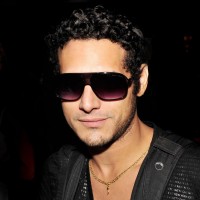 Edward Colelli is an award winning published Artist/Photographer from Syracuse, New York. While documenting the premiere collections of Mercedes-Benz Fashion Week, his primary focus is fine art. In 2012 Colelli's Gray Matter Series was featured in Manhattan, Baltimore and Dubai, making this his debut appearance competing at the international level. The following year Edward integrated photography with textiles & released the graphic clothing line Obelisk (Obelisk-Designs.com). His artistic vision was revealed through a combination of techniques, resulting in a collection of imaginative compositions with a classic style.